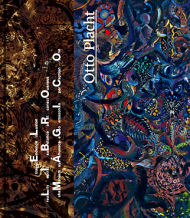 A free spirit spontaneously wandering from Prague to Amazonia and back, Otto Placht is often referred to as a painter of the jungle or a painter of ayahuasca. But he is first and foremost a seeker astride two cultures and two realities, unwilling or unable to choose just one. Much like his monumental canvases, his journeys are transformative and remain forever on-going.

“Fear of pain, love, death, immortality, self-awareness, lifelong confinement of inhumanity, of vaulting eternity.
It dawned. A plane of blue and black that I don’t see.
What is it? It´s black, it´s alive, only truth is white. The most tender picking of head lice.
Bark.
I have already mentioned it. Ayahuasca is death, knowledge, a stigma of life, balance. A potion from the river of lights. A state of mind chilled in recognizable peace after enduring insanity. Weeks of rainforest solitude where the collapse of time breaks down the technological maturity of the higher species of human uniformity.
And the wind will bring a flow of rain.”

Placht first travelled to Peru in 1993 after having exhibited in Miami alongside a Peruvian shaman, Pablo Amaringo. Intrigued by the mystical dimension of Amaringo´s drawings, he visited him in Pucallpa and later built a house and started a family in San Francisco, a Shipibo tribal village in the jungle. Like a long line of European painters before him, he was seeking inspiration in unknown lands, but it is Placht’s sensitivity, childlike curiosity and immense artistic talent that have enabled him to develop an exceptionally authentic approach to the creative process that raises his work far beyond the realm of mere exoticism.  While his large scale paintings remain semi-abstract and symbolic, it is the smaller diary drawings and aquarelles of everyday life in the village that reveal both his skills of observation and of painting.

Distinctive in their style, format and hue, Placht´s paintings form an integrated vision of the artist´s personal experience of the Peruvian Amazonian culture and spirituality, and of the ecosystem of the “madre selva”. They possess an immediate disturbing vitality evocative of the jungle - the trees, flowers and seeds of which are used to produce them - and the general chaos of life that can only occasionally be balanced.

Otto Placht draws a large part of his creative energy and inspiration from shamanic rituals and trance states which he experienced among the Shipibo tribe and under the influence of ayahuasca, the sacred hallucinogenic brew. He also refers to the Shipibo fractal-like patterns use on textiles and ceramics.  With their flamboyant colours and multitudes of shapes, structures, plants, figures and strange creatures of the jungle, Placht´s canvases hold their own hallucinatory quality. They are part memory, part vision, half open doors to new perceptions for the un-initiated.

Otto Placht (*1962) studied at the Academy of Fine Arts in Prague, Czech Republic. He began as an expressive painter in the 1980s, and was considered one of the biggest talents of his generation. From his Central European roots he draws his relationship towards symbolism, mystical decadence, surrealistic expression and new figural painting. In 1993 he visited Peru for the first time and has been returning ever since transforming his first-hand knowledge and personal experience into striking works of art distinctive in their style and creative energy inspired by shamanic rituals of the Shipibo tribe. He is also engaged in studying and protecting the ecological structure of the Amazonian rainforest. Otto Placht has exhibited widely and taught painting in the Czech Republic and Latin America.