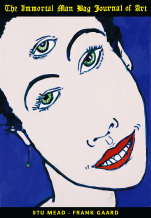 The Immortal Man Bag Journal of Art | Complete collection of printed editions. Featuring Man Bag No.6 for the first time | Text about the adventurous history of Man Bag written by Frank Gaard and Stu Mead | Extended by a photographic documentary section | Official release date is March 17 2017. | All that on more than 160 pages on fine heavyweight white and creamy paper. | 15 x 21 x 2 cm


"Man Bag had grown out of the Artpolicecomics magazine project which had begun in 1974 by the late 1980’s after an especially vicious attack at The Minneapolis Institute of Art had struggled to continue to publish the Artpolice zines. Because of these attacks and subsequent aftermath I had lost my teaching position at the art school (Where I had taught Fine Arts for 16+ years) which was associated with museum and my ability to subsidize the project was considerably reduced. The Artpolice ( a non-profit tax exempt corporation 501(c)(3). IRS-USA ) was a collective with regular contributors and many artists passing through the pages. The United States was passing through a phase of censorship based on various right wing ideas about what art should be subsidized by the U.S. Government. Robert Mapplethorpe’s photos and Andre Serrano’s famous “Piss Christ” were the prime targets of the zealots anxious to eliminate any government subsidies to art that type. Suffice it to say that Man Bag grew out of this period as a satirical and political example of free speech particularly in the realm of taboo sexuality. We were underground enough to pass without much notice and we built a small network of contacts and associations built out from the former mailing and subscription lists of the Artpolice Journals. So in a sense the attacks and subsequent outcomes had begot the Man Bag.


Important as well had been Stu Mead becoming a regular contributor to the Artpolice zines in the late 1980’s his art pushed the project towards a more extreme position which brought other artists to the project gay and straight who wished to push the project towards the wilder and sexier side of expression. Ironic too as Artpolice had initially found its voice as a free speech comic based in fine art (particularly in drawing) with a politically incorrect view of the contemporary art scene which had been dominated by minimalism and conceptualism. Man Bag brought back this outsider viewpoint on sex and art with more focus and with more of a pornographic edge. The sex proved to be essential to Man Bag its very essence was to be a return to a sense of origin where we found our inspiration and arousal."