Redas Dirzys: Let's be Part of The System

Redas Dirzys: Let's be Part of The System 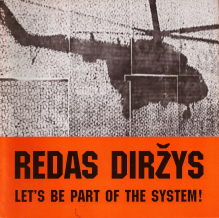 The catalogue was published for Redas Dižrys' project "Let's Be Part of the System" in Bilina's town hall tower.

Strong and hard built system(s)
This was an opportunity to see two different kinds of art histories: the Soviet and the Western. (Now I am even starting to see huge differences between Western European and American versions of art history, and so on). The most exiting thing — some parts were absolutely different. Especially the art of the 20th century as depicted in Soviet art history. Only parts of Western art were related to communist ideology and were more or less comparable to the paradigms of socialist realism. On the other hand, in the East only movements in Russian and other Eastern European art activities could be found, which had a specific impact on the Western art in Western art histories.

It’s now becoming more and more evident that art history has only one mission — to defend the large collections of rich museums and the personas who would lose their treasures if the system failed. The entire industry of starmaking was created to organize a strictly functional price-value system. A very important part of the system is the strategy of showing a few stars in the context of well-prepared and proportionally weighed "filling." What is the concept of "filling," and how did it happen that Eastern European countries contributed the vast majority of it?
First of all, behind the Iron Curtain every scrap of information about Western movements (mainstream of course: rock, pop music, abstract expressionism, pop and minimal art) was treated like a kind of ultimate freedom. Even the formal abstract picture was a radical gesture in Soviet society. So after the collapse of the system all the vanguard artists and activists flooded to the West, and they soon realized how obsolete and naive they were in the context of Western theoretical jugglery. Only a few lucky souls from the communist camp succeeded in building careers, because of the clever strategy of applying a Soviet style according to Western stereotypes, and filling already existing folders. Another step was the reorganization of national systems into a pro-Western one, with the help of ideology, instead of an historical survey. (...)