Martin Zet: THE SUICIDE OF THE IMAGE

Martin Zet: THE SUICIDE OF THE IMAGE 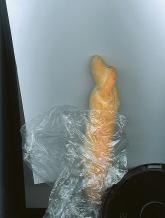 Another book by Martin Zet consisting of descriptions of life events, commentary, and documentation and photographs of public and private performances. The reader will learn about his application to the post of director of Czech Television, how he gave up his car because of the war in Iraq, how he illegally crossed the border, sold money at a discount and became a terrorist. Learn to make a revolutionary flag for a country of your choosing, or dance to hip-hop with Hitler in the Eagle’s Nest.

„The average life of mammals is 800 million heartbeats. In human terms, that's 19 years. If we didn’t live so long, the human world would be a delightfully unambiguous place. Nineteen — that's exactly the age when bright black and white vision begins to soak up grey nuances,* as one slowly becomes pliable, caving in to compromise.
To mature into the age of reproduction, to beget children and die. Children raising children — this is exactly what "mature" educators are scared of the most. I take great pains to return to a state of consciousness in which the recognition of what is really important (fun, love, friendship, sex) and distinguishing right and wrong (which some adults assert doesn't exist) is the most natural possible thing. And dealing with something other than what you want is just wasting time.
A general and also a personal problem is that I am living longer than what I was made to** (and if there were no doctors, it would be just those 19 years).“

"My wife Erika insists that I incorporate into the contract a stipulation stating that if I go from my new
post straight to jail, I’m to be imprisoned in Vinaøice
(a village about 3 km from our home)."

"EVERYBODY
IS
PROFITING
FROM
IT
EXCEPT
THE
VICTIMS!"

Excerpts from the book.

More about Martin Zet at divus.cc