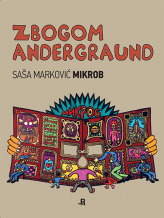 The Story of Microbe

“Microbe is an organism typical for modern East Europe, capable of eating as mush as served, but also able, when forced to famine, to live for months fasting, ready to eventually accept any political system, any nasty trick .”

The last two decades (1990’s and 2000’s) in Serbian political, social and art life were quite tumultuous. Rhythm of the geopolitical turn of events in the nineties seemed to us like some natural disaster we head to cope with, or hide away from. During our everyday struggle to survive by searching for material goods and spiritual values, it was difficult to keep aloof. In faith that this almost perceivable change in the system of values was only a brief excess, unaware of much greater and more serious social changes, we found ourselves in the position of a boiling frog. Looking back at the nineties of the last century, they still give the impression of a hazy moment, of fishing in troubled waters, with consequences we permanently feel more and more. With many generations born before the 1970’s there is a feeling as if they have not estimated well the feasibility of the aims of their, now quite clearly futile and unproductive, fight for a better society.

Not many artists manage to record a certain moment in a clear and witty manner, to comment on actual changes and their initiators, or warn of certain derailments, i.e. collapses of the system of values. Saša Marković Microbe is an exceptional person, not only in our society but also on the broad scale, who managed it all. He lived for and through his art and presented it in different forms: performances, exhibitions, street acts, radio programmes, different videos, video clips, music spots, texts, graphic designs and covers for printed editions. He also designed the covers of CDs. His lectures on history and phenomena of rock and roll were visited by many. He also provoked intensive disputes and monologues in some private surrounding. Saša Marković was able, in his very specific way, to comment actively, lively, the social situation in Serbia, in the last decade of the XX and the first decade of the XXI century, in visual, narrative descriptions of very specific, real occurrences, persons and events.