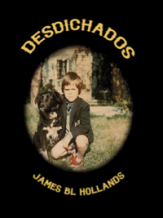 Desdichados is a collection of the synthetic orchestral work of James B.L. Hollands. Comprising the soundtrack to his last two video works - Telepathy 101 and The White Queen - alongside extra tracks, Desdichados is a mournful, exhilarating take on classical music, using techniques influenced by hiphop, grime and avant-garde rock alongside influences of minimalists such as Terry Riley.

Meaning "unhappy or disinherited ones", Desdichado as a term was first mentioned in Ivanhoe by Sir Walter Scott. It was then used as the title of a poem (El Desdichado) by Gerard De Nerval, apeearing in his collection "Les Chimeres", which poem was later quoted by TS Eliot in 'The Wasteland", which circularly is also quoted in the surtitles of Hollands' "White Queen"

The soundtrack for Telepathy 101 was originally released as a limited edition cassette by Entracte Records
http://www.entracte.co.uk/project/james-hollands-e108/ and there are still copies left.
Only two of the tracks on 'Desdichados' are on the cassette in a similar form, the others being remixed.