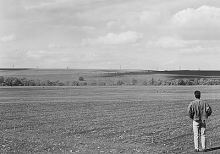 Media in The Fields

At first glance, the landscapes of Lukáš Jasanský and Martin Polák may appear somewhat insipid, often to the point of being horrifying. Their theme - now known as classically deviant  one - is being agronomically profiled, set free from any singularity, not to mention romanticism. The landscape seen from an urban point of view, the landscape beyond the hiking signs (though one appears in one picture) whose desperate immensity is often too much to swallow for the strength and understanding of an individual nursed on the metropolis. In this cycle, the artists also apply their traditionally “wonder-struck” approach. And this is how they show that we in fact know nothing about our own landscape, as again and again they construct a phantasmagoric world from a single photograph and are fascinated by its possible, and, at the same time, ever so extravagant literalness, hidden in each grain of the negative.
...
From text by Pavel Vančát

This long postponed text has been slowly coming to me now for about a year – in my head, while reading various books, going through catalogues and photographs, while „browsning“ through the cycle Landscapes (Country Photography), which in this publication is receiving (after the exhibition and demo-CD) its next „definitive“ context. As with everything postponed, this text also carries within it a trace of hesitation, because the right, and thus the lucky, (sometimes carefree, but always slightly misleading) moment of inspiration is probably gone, and the authorities on which we should lean, rather than being an assurance, are becoming a pretext for the abuse of certain discursive practices.
The longer I dragged my feet deciding what and how to write about Lukáš Jasanský and Martin Polák´s position (regardless of wheather ti was reflective, intuitive, or cultivated through dialogue) towards history and the possibilities of media, including their stand on the visual culture of its environment (1), the more it became clear to me that the photography of this art duo was a thing to be taken seriously. One of the sources of my extended procrastination was an unwillingness to accept the entertainment side to their work to which we usually and rightly succumb while looking at it. I did not wish to move a „light pen“ to depreciace the lightness and obviousness they have been bringing to the visual art context at home and in interantional circles since the 1980s. The certain heavy-handedness of several „explanations“ I managed to come to at the edge of the cycle Lanscapes could then be blamed on spite.
...
From text by Marek Pokorný