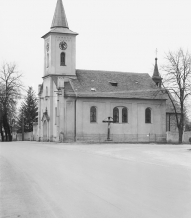 Book of black and white photographs containing three cycles capturing slow creeping decline of czech countryside. „Village“, „Thou our rural reconstruction!“ and „The old way“ are strange combination of humor and professional obsession in photography. Thats the way how photography becomes art without attribute of technology.
Above our heads events have towered, straining the iron construction of the inhuman world that exhorts the agreement of our will and claims that it had originated from that will. And yet, it is still up to us to decide whether or not we wish to become its culprits and captives. This ogreish metallic construction does not know or does not want to admit that within itself it has been nibbled away at by a million counter wills that will one day use the remnants of this construction as building material for the creation of a brand new world. But let us not forget, however, that the appearance of this next world will stem from our current most secret thoughts, and is already hidden in our own heart’s heroic intentions and dreams.

The writer Hilaire Belloc wandered on foot throughout the whole of France and England, unveiling to himself the countryside’s ancient appearance — the network of old Roman roads, the borders of Celtic provinces. One could say: pure eccentricity; what point is there to such discoveries? For such discoveries certainly do not make any direct contribution towards the moulding of modern society or to the increasing of material wealth. They do, however, uncover - often more eloquently and persuasively than written sources - the traces and contexts of human history and past civilisations. Civilisation and technology change the very surface of a country; pedestrian paths or roads intended for horse-drawn vehicles had to allow for different characteristics in the road surface than today’s contemporary highways for automobiles do; nonetheless, they often followed similar paths — their task being to connect equivalent parts of the country.
It seems that human memory has a need to constantly make sure of its unity and continuity, thereby allowing some sort of design and meaning to become apparent. Why else would geologists and archaeologists strive to uncover the history of our earth: the buried layers of its former ancient appearance, the development of life in various pre-historic periods? Is it always possible to claim that this type of exploration has some practical goal? That it will be imminently of use to something or someone? – Hardly so. It is instead evidence of the fact that the mystery of human life, and life in general, in fact, even the mystery of the existence of all things whatsoever, still remains open, and, even more so, that it deepens itself with each new discovery, and indeed that if humanity were suddenly free of these concerns, interests and anxieties, their very dignity would suffer at that same moment.

So be it that civilisations rise, mature, and die away; we are on this planet only to build and then destroy civilisations, these temporary structures, machinas transituras, just as one generation of termites builds a termitary that will be destroyed and once again rebuilt in the course of the unyielding continuity of a species.

Where does human suffering come from? Is it only the consequence or accompanying result of injustice or material misery, or does it exist independent of the material and social situation of man? Can a man suffer spiritually even though he "does well", as they say, and, if so, then why?

If we say out loud the word ‘suffering’, we might at first recall an idea or memory of hunger, cold, dirt, illness or bodily injury. But physical suffering is accompanied by mental suffering of various varieties and degrees: by the sensation of humiliation, anger, envy, fear, derogation, or the paralysis of spiritual capabilities and powers. Once the physical desolation and pain achieves a certain level of violence and gravity, our physical involvement becomes so intense that there is virtually no room left for spiritual suffering; we are fully exhausted, unable to resist any humiliation and pain — forced to bear the passing of infinite time, which cannot be whiled away even through sleep. One could argue that we have chosen an unsuitable moment for such contemplations. When one is lying under the debris of a collapsed building, caught in the gears of a terrible piece of machinery that is dragging one’s body relentlessly on and on, or when one is forced to listen for the sound of hob-nailed police boots behind one’s door, no doubt one can hardly find the time to contemplate matters not directly relevant to the situation in hand at that present moment. We can certainly understand that it is not easy to think rationally when a person is experiencing physical suffering - when one is oppressed by anxiety and uncertainty. We do believe, however, that it is definitely necessary to at least try; or that it is necessary that at least some people do try. For our future is not dependent solely on our actions at that very moment, but, and perhaps much more importantly, on our thoughts at that moment and what is at that point rooted in the depths of our heart and soul.

We have inherited our present world from our ancestors, but we should not be blaming everything on them alone. It might be that we are indebted to them not only for having continued in their work but also sometimes for having corrected it. According to the idea of the Christian community of the living and the dead, it might be that we are dependent on them, but they are equally dependent on us. For it is in our power, in the power of each and every one of us, to repay the debt that ties us in both directions directly to them: not only can we rectify the ways in which we have betrayed them, but we can also make right anything that they might have seen and done wrongly, the things in which they were perhaps mistaken. - - -

The time that is lost cannot be regained, and it is often impossible to physically repair that which has been done wrongly. We know how feeble we are when it comes to sticking to the best of our resolutions. But it is not possible to live with this constant dichotomy within oneself, with the feeling that we have ended up somehow outside of our life without quite knowing how: doubtless it was a series of both small and large infidelities and betrayals that all of a sudden created the large abyss before us. Death seems suddenly terribly close. What have I done with the time that separates me now from my childhood—at once so distant and so close?

Have I allowed the sources that were streaming from it dry out, have I dimmed the light that made childhood so bright?