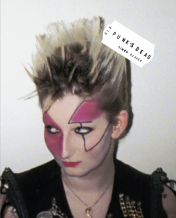 In 1976, when I moved into the St. James Hotel in London, I bought myself one of the cheapest pocket cameras available. Fully automatic, with no controls or settings, it just required a simple slot-in film cartridge. An idiot could use it – and I did.
I knew I did'nt want to be like other photographers, so I chose never to take a black and white photograph or focus the camera. Subconsciously I concentrated on the women and artists at the heart of what would later be known as 'punk' in London.
Women such as JORDAN, SIOUXSIE, DEBBIE JUVENILE, TRACIE O’KEEFE, ARI UP, POLY STYRENE and NICO
Artists and writers such as MALCOLM MCLAREN, HELEN WELLINGTON-LLOYD aka HELEN OF TROY, BERTIE MARSHALL aka BERLIN and DEREK JARMAN.
The book PUNK’S DEAD is a product of that camera and those times - my family album covering the years 1976 to 78. The photos you see in it were all unplanned, spur of the moment shots taken by myself for myself and, up until now, with never a thought given to publication. In over thirty years, they have only been seen by a handful of close friends. I used to think they weren’t good enough to show people. Now I think they are almost too good.

The youth cultural phenomenon known as punk, the extent of which purists now date as having lasted in the UK for little more than fourteen months, between 1976 and 1977, can be seen in retrospect to have held a mirror up to the expectations and ambitions of all those whom it touched. To some, punk was Class War and the fight of Left against Right – a re-run of the Spanish Civil War in the brutalist and deliquescent Britain of the pre-Thatcher 1970s; to others, it was an avant-garde fashion parade: a damply British reclamation of the Zurich Dada or the Ballets Russes. And to yet others it was the gleeful and determined desecration of rock music’s Church of Authenticity, in which was worshipped the sanctity of the Blues. To Malcolm McLaren, speaking shortly before his death in 2010, if punk could have any claim on historical or historic status, it would best be remembered as “like doing the Twist in a ruin.” All of these definitions have iconoclasm and confrontation at their heart, and also the causes of youth and newness. And from this punk acquires a further definition: that in its games with acceleration and deceleration, in its perverse fusions of tradition, English quaintness and science fictional strangeness, it appeared to confront the stagnation of cultural consumerism – by describing, in a cartoon-like language of self-parody, the notion of modernity itself reaching critical mass and, unsurprisingly, imploding. Hence perhaps the slogan above of the door of the ‘SEX’ boutique at 430 Kings Rd. Chelsea: ‘Modernity Killed Every Night’.
For Howard Devoto – co-founder of Mancunian punk pioneers, Buzzcocks – the question was both more emotional and more philosophical: the movement had been a device for ‘trouble-shooting modern forms of unhappiness.’ While for the artist and film-maker Derek Jarman, in his uneasy punk fantasy ‘Jubilee’ (a non-punk film that included some punk people) the violence of punk was filmically related to both the lineage of Leftist cinema (the political allegories of Lindsay Anderson) and the neo-Romantic ‘Englishness’ conjured up in the films of Michael Powell and Emeric Pressburger.
These are all strong and emotive themes; and clearly, for all its assertion of nihilism, negativity and pantomime anarchy, punk was also richly creative, pro-intellectual, politically aware and more inclined towards elitist and exclusive romanticism than a socialist dream of the culturally orthodox. And in this lay punk’s vitality as a catalyst – enabling the conversion of disaffection into a multi-allusive individualism, which by definition was always going to be short-lived.
Simon Barker was a key witness and participant within the immediate pre-history and originating energy of punk. His photographs share with Nan Goldin’s early studies of the New York and Boston sub-cultures of the 1970s, a profound and still joyously audacious sense of youth going out on its own into new freedoms and new possibilities. In this, Barker’s photographs from this period capture a moment when the tipping point between innocence and experience has yet to be reached. The model and sub-cultural celebrity Jordan, for example, is photographed as a self-created work of art – her features a nigrescent Picasso, her clothes more post-war English county librarian. The incisive provocation of her image remains untamed and unassimilated, nearly forty years later; and within her surrealist pose there is the triumph of art made in the medium of sub-cultural lifestyle. The sites of punk’s war with the world are now well trodden, and histories proliferate – most particularly in an oral and anecdotal form. There is the sense that punk was a moment of raised consciousness for those who were caught in its cyclone and, as such, the movement has become both a rallying point for a generation and a subject of historical fascination. How might the image-satiated culture of late post-modernity rediscover the cold bright sparseness, dereliction and decay that comprised both the inspiration and the host environment of punk’s aggressive modernity? Simon Barker’s photographs from this period are a rare and intimate account of punk’s ability to mint newness. They are also in their way classic portraits of youth – adventures close to home, and the cool stillness of seeming to live beyond the end of history.
Foreword and St James Hotel by Sixjordan black patent st. james hoteljordan lindsay kemp jubilee kiss*jordan lindsay kemp jubilee kiss*jordan black patent st. james hotel*Seditionaries*debbie juvenile shop girls seditionaries*Siouxsie*siouxsie jordan monroe eye patch st. james hotel*Live*poly styrene x ray spex