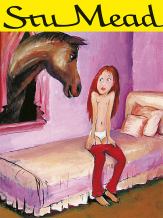 Stu Mead's paintings touch the art world at a tangent. Not that he's exactly an outsider, having received a formal art education. But the Berlin-based American has a bigger reputation in "underground" culture than on the established art scene. Maybe that's because his paintings are unabashedly (one could even say sincerely) about their subject matter rather than about art. (Barry Schwabsky)

Stu Mead graduated from the Minneapolis College of Art and Design in Minnesota as a skilled and ambitious painter, someone who stood out in his field and would have made a name for himself one way or another. His early works show a solid painting style and an admitted inspiration in European modernism. His artistic skills are accompanied by a strong personal story. Stu was born with a congenital condition that causes his physical handicap. He studied at a school that in the 1970s was one of the most active centers of the radical feminist movement. One of his teachers was Andrea Dworkin. The subjects of personal identity, gender, social emancipation, and the exploration of existence all hung in the air and were easily articulated by Stu. In several works, he explored the subject of a male figure in a wheelchair. He found inspiration for his typology of female characters in 1950s American pop culture. The way he depicted space in his paintings shows his enchantment by the mannerist polyhistor and graphic artist Piranesi, whose labyrinths and imaginary towers resonated deeply with Stu. His success as a painter was set.
At this point, someone – I think it was Frank – notices Stu’s sketchbook and tells him to focus in his art on what he likes best. He tells him that one reason for making art is that it can make you feel good. From this moment on, his paintings become less consciously sophisticated in their visual composition, and the settings are reduced to mere hints at dark English-style rooms with a fireplace, pseudo-Gothic baths, and parks or cemeteries. The human figure moves to the foreground, skilfully worked, consciously straddling the line between fairytale illustration and vulgar comic-book humor: Stu brings his girls on stage. (Lenka Klodova, excerpt from the book introduction, 2015)

The fantastic and unrealistic nature of Stu Mead's art probably makes it possible for galleries and publishers to exhibit and reproduce his work, though its themes encounter the outer limits of legality. Mead's Freudian approach to his own sexuality is very close to surrealism and he often refers to the paintings and drawings of Hans Bellmer and Balthus as inspiring his own work. Bellmer and Balthus have both made no secret of their attraction towards young, female objects of desire. (Ghazi Barakat, Apocalypse Culture 2, 2000)

Stu Mead, master of the wiley prepubescent, slaps away at his slick, throbbing canvases deep in the Midwest – St. Paul, Minnesota, to be exact. Mead, luckily working in a community that prefers to turn a blind eye to what he does, has managed to build and sharpen one of them – there artistic visions ya read about in those fancy books. And he does it with a painting style so thick and creamy it takes a few minutes for the local grocery to dig through the sickly sweet camouflage to the tangy puerile center. (Steven Cerio, Seconds, 1997)